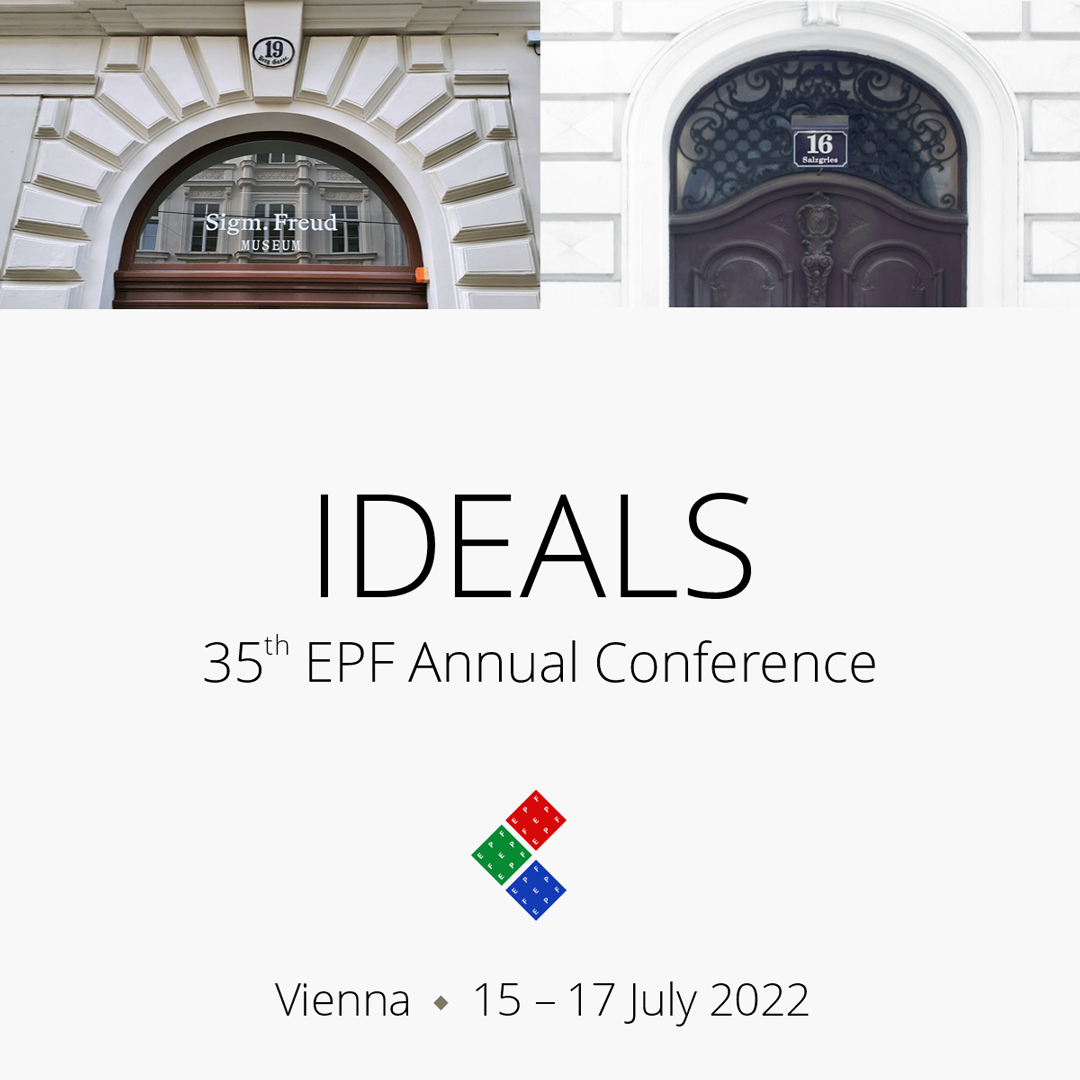 we have chosen the theme of Ideals for the EPF 35th annual conference to be held in Vienna, the birthplace of psychoanalysis. As many of you will remember, EPF was due to hold the 33rd annual conference in Vienna in 2020 but due to the pandemic we were obliged to cancel the event at very short notice. However, we did not cancel the programme on the theme of Realities and were obliged to arrange an online conference in 2021. Now we are going to Vienna with this new theme.

Let us first of all take a brief look at the etymology of the term ‘ideal’. Jorge Canestri, in the EPF Bulletin 55, 2001, observed that the term ‘ideal’ had a common root with ‘idol’ from the Greek word ‘idéa’ meaning to ‘see’. The literal meaning of the Greek idéa is “…aspect,shape, appearance…and even though this term was already used in philosophy byDemocritus with the meaning of ‘shape or visible schema’ the word is a direct consequenceof Plato’s philosophy, when it took on the meaning of abstract model and ideal that we lookupon as a measure of comparison”. Canestri’s reflection posited an emphasis on ‘theinevitable oscillation between seeing and thinking, form and representation, image andabstraction…’ and turning to Freud’s Moses and Monotheism he cited Freud’s well-known proposal concerning the human discovery of the mind related to the infant turning from one parent to the other:

…this turning from mother to father points in addition to a victory of intellectuality oversensuality…an advance in civilization, since maternity is proved by the evidence of the senseswhile paternity is a hypothesis…in this way a thought-process in preference to a senseperception has proved to be a momentous step. (Freud 1939 p. 114)

Freud first conceptualized the term ‘Idealich’ in 1914 in his paper On Narcissism: An Introduction and later in 1923 in The Ego and The Id, but he did not differentiate between ‘Idealich’ (ideal ego) and ‘Ichideal’ (ego-ideal). Followers of Freud began to propose certain distinctions. For example, Lacan (1966) differentiated the Ego (Moi) from the Ideal Ego (Moi idéal) and Ego Ideal (Idéal du Moi). The Ego as bodily ego is mediated by the infant’s mirror stage, while the Ideal Ego is a bodily model of idealized others which causes a tension with the Ego. The subject measures his ideal not against himself, but against the image which in his mind is desirable for Another. This image is his Ideal Ego. A third party thus mediates recognition or denial of recognition (“the Other with big A”). When the subject identifies with this Other and his judgement regarding the Ideal Ego, The Ego-Ideal emerges.

The Ego-Ideal provides for the regulation of the relationship between the Ego and the Ideal Ego. And through the Ego-Ideal originating from the Other, symbolization arises. Thus, the Ideal Ego as an image belongs to the imaginary register, while the Ego-Ideal as the result of an also linguistically mediated identification with a significant Other belongs to the symbolic register (we will refrain here from discussing the relationship between Moi and Je). These differentiations relate to the question of how ideals can serve the formation and maintenance of libidinal and object-related goals or how they can be used for goals on the level of defending primary narcissism in both individuals and groups which are potentially destructive. Following the evolution of psychoanalytic theories on ideals since Freud we can ascertain that for everybody ideals help to structure psychic life, but they can also become tyrannical and tormenting, while on the other hand a lack of ideals can lead to feelings of disorientation, emotional emptiness and despair.

For the psychoanalyst there is an optimal way to practice psychoanalysis that came about from Sigmund Freud’s consulting room in Vienna. He devised the most favourable way to treat the hysteric. While his setting evolved in an almost accidental way it soon became the standard way to practice psychoanalysis. The structure of analytic sessions and the mode of being with a patient became the methodology: because it functioned well. Could we concur that this established way of practising clinical psychoanalytic work has become the ideal of psychoanalytic practice?

The pandemic of 2020 changed the way analysts customarily treat patients in a radical way and in a way that Freud, and the majority of us, would never have imagined remotely possible. Analysts who had long maintained a serious criticism of so-called ‘remote analysis’ and who dismissed it as a distortion of psychoanalysis were obliged for the first time to ‘see’ their patients ‘remotely’. Many were resistant but the majority of analysts all over the world had to face a grim reality when their governments instructed us all to lockdown and to stay at home. Each analyst made the difficult decision to either work online or on the phone or to continue to see patients while taking all the necessary safety measures like wearing a mask and ensuring distance and open windows.

Rather quickly analysts started writing about the new situation and the pressures it was putting on their practice. Some analysts had already worked with patients who were living abroad and so it was not such a strain for them as it was for those who had never considered it possible to work analytically online without the patient in the room. During that time each analyst would have to rely on the patient to be responsible for the control of the setting and each analyst was exploring the issues concerning psychic work in the treatment of a patient who is not in the room with them. Are these changes calling into question an ideal of psychoanalytic work?

Turning to the outside world how do we apply our psychoanalytic theories, arising from clinical practice, to understand the other kinds of pandemics such as, for example, the rise of populism on an international level? Already, before the Covid-19 pandemic, the world was witnessing the horrors of climate change alongside a U.K. Brexit plan that was based on an ideology of ‘taking back control’. And this ‘idealization’ of human values reminds of us German history and its dark chapter of the prevailing Nazi-ideology that showed the danger in which idealization is used as a defence against the unavoidable disappointments in human experience. Over-idealization can so easily become a perverted form of creating so called ideals which lead to destructive processes and outcomes. The ideology at the root of Brexit threatens to divide a united Europe that had emanated from the ashes of two terrible world wars that had taken place on Europe soil.

A look at our contemporary world, especially adolescents and young people, shows a tension and gap between a search for ideals, a lack of ideals and a fundamental dependency on ideals that amount to ideologies. Does an ideology arise due to a lack of resources and opportunities?  Perhaps the alarming rise of populism in the West indicates the human tendency to deny feelings of insecurity by enlisting simplistic ideologies that constitute a sham security. But psychoanalysis is not free from creating its own ideologies stemming from historical conflicts about what constitutes the ideal theory and practice of psychoanalysis. What is the optimal way to train psychoanalysts? How do we ideally assess the analyst-to-be and continue to monitor the analyst-who-is-becoming? In examining our own divisions within our psychoanalytic organisations is it possible to address the issues of prejudice that threatens to destroy the heart of psychoanalysis? Might that be a solution to understanding the rise of populism? How can psychoanalysis cure the ills of our contemporary world?

We are looking forward to inviting you to Vienna to discuss these questions and themes in person we sincerely hope for the EPF’s 35th Annual Conference.

Jan Abram           Vice President and Chair of the Scientific Committee

All references available from heribert.blass@epf-fep.eu