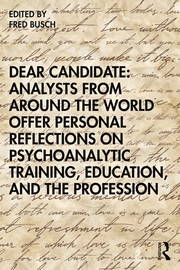 The invitation came from the editor himself, "Doctor Busch", as we called him among candidates (psychoanalysts in training or affiliated members, according to the nomenclature of each institute). I was still completing my training at the end of last year (2020) when his prompt but generous email arrived. He asked me if I would accept - just as he invited three other colleagues also in training in different countries - to write a brief back cover endorsement for his soon-to-be-published book. Without yet really understanding what it was all about, I accepted.

Fred (as he introduced himself) then sent me the printed manuscript. I first glanced at those pages, which I soon plunged into, and then knew to be precious. Fred asked 42 senior psychoanalysts from various societies around the world, what they would say, in the form of a letter, to a psychoanalyst still in training. They answered.

The book seemed to me to exude in a general way that certain affection of the senior analyst; that je ne sais quoi of one who has already been there, and conceives with empathy the younger analyst along the way. I warn you, however, from the outset: this "there" of each one is a very distinct and particular place.

There seems to be, however, aspects that are commonly shared. As for instance, in their accounts, something that is transmitted from generation to generation: the gratitude to one’s own analyst. It is touching, and not difficult to notice. Another almost unanimous point seems to be the affection they have for their own training, and for the fact that candidates all over the world (there are currently 5,342 according to the IPA) are beginning to follow a path that these analysts started more than 30 or 40 years ago.

We have at the beginning a resounding passage that, I suspect, resonates with many - if not all - of us: "I feel that I have allowed myself to be contaminated by the psychoanalytic "plague" (in Freud's words) to such an extent that I have risked sacrificing other aspects of my life. From what I know about you, you also run a similar risk, don't you? I was able to observe what was happening to me by using psychoanalysis. The 'plague' became a remedy”.4 Our current IPA president reiterates: "Besides, when you start on the path of becoming a psychoanalyst, you soon realize that it is also a way of living, a way of being in the world".5

Another common aspect seems to be the satisfaction for the choice of the profession - not so impossible, by all indications. Or, as Stefano Bolognini will conclude in his letter, "impossible, but fascinating"6. "Believe me, it is a rare privilege"7, we will read in another testimony further on.

One will notice, throughout these pages filled with empathy, experience, generosity, that there is also - more than a sine qua non - passion; a lot of passion. For psychoanalysis, for thinking and doing psychoanalysis, for the memory of Freud, for the world of psychoanalysis; at least from these 42 authors, in my dream, representatives of a much larger psychoanalytic community (we are currently 12,693 members of the IPA).

However, let's not delude ourselves. Those who ‘have been there' do not spare the other side of the coin of this valuable trunk either. Thus, among the aspects in common, they emphasize the fundamental and necessary - and often painful - importance of analysis itself in the foundation and sometimes along this fascinating, but we know, also challenging path. 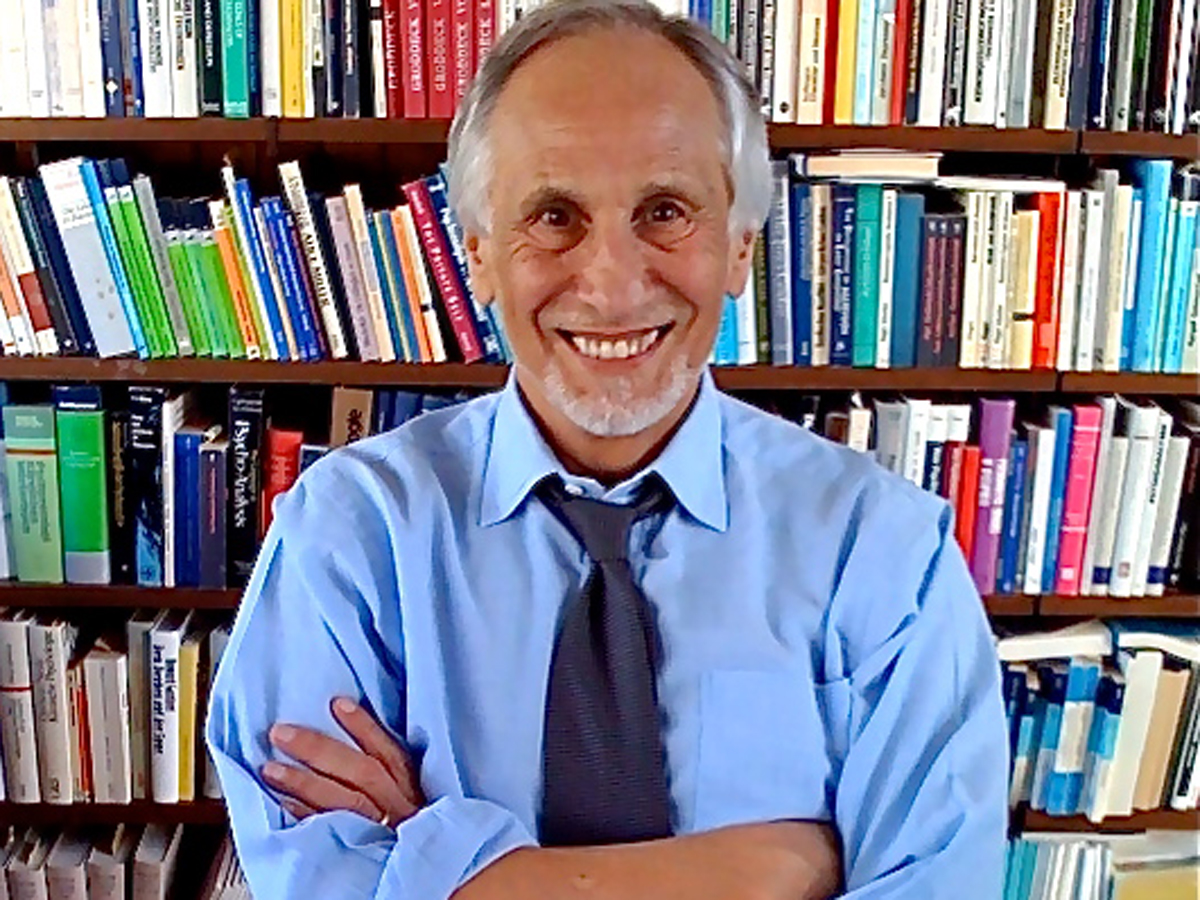 Fred Busch
From another prism spectrum, in one of the most challenging letters, the senior colleague talks about what he called invisible walls: the danger of psychoanalytic certainties that can be as harmful as seductive, in a kind of anti-psychoanalysis, also present, he tells us8.

Apart from these reasonably close boundaries between the testimonies, the contents that follow will highly vary. From indications of indispensable readings, to pondered thoughts regarding the role and reach of the analyst in relation to their patient; from the widespread idea that a training in psychoanalysis never ends throughout one's life, to the importance of non-isolation in the concavities and convexities of one's own consulting room. We have, for example, the reminder that we are - or should be - before psychoanalysts, citizens of a country and of a world. The colleague reminds us of the importance of a political self of the analyst9.

Several senior colleagues will, naturally, refer to the tasks of the clinical practice: "True understanding does not come from the application of theories or the correct analytic technique. That helps you to put yourself in the right state of mind; but it is your trust and openness to your own mind, silently working, seeking and making contact with the mind of the other, that produces the flash of understanding (...) I encourage you, though, to read as much as you can".10

The same colleague on another page reminds us of the necessary tolerance of the analyst, through Brenner’s words: “Always remember that patients can only come to our offices, that's all they can do. No matter how brave or hostile or provocative they may be, no matter how recalcitrant to our best efforts, these are who they are right now and they can't be otherwise."11

When browsing through these pages, I contemplated a simple little passage that particularly touched me, the quotation of a referenced suggestion from the master himself: "(...) words that I have also tried to keep in my mind are Freud's dictum that we should always treat our patients as honored guests in our homes".12

There is also mention of clinical contrasts experienced in the practice of yesteryear - when these authors began their training - and that of now. For instance, a colleague points to the fact that, as he observed in his practice, in the past the challenge seemed to be posed by forms of superegoic resistance from the patients (which, he says, was considered "normal for the time"); while today he now observes as perhaps the greatest challenge, narcissistic resistance relative to the ideal Ego, which would make dependence on the object (in an analytic process) difficult, making it even often, in some patients’ point of view,  "an unacceptable and humiliating condition".13

The French colleague goes on to warn the candidates: "To move from the couch to the armchair behind it, you will need to have elaborated "enough" (in quotation marks in the original) of your own psychic world, both the Oedipal and the narcissistic pole. Your patients' transference will test the mettle of your psychic functioning”. Throughout our life as analysts, is the phrase that crossed my mind then.

Several others point to the importance of our care and dedication to the society we were part of as candidates, and will be part of as members - sometimes the same society, at other times not. Some of them tell us about their ‘adoption’ of another society, different from the one in which they graduated. Regardless of the choice, they emphasize the relevance of belonging to the so-called 4th axis of our international association common to all, namely, the institutional life. Thus summarizes the colleague: "Becoming a psychoanalyst requires working on and continually elaborating your inner life and also your life within the group of the Society of which you will become a member”. The colleague articulates the necessary zeal for our home – involving our thinking, our work, studies, teaching and exchanges - scientific and affective - among peers.

Due to the moment, in one of the reports the on-line or remote issue is approached with criticism to what was once conceived as unfeasible: the online analyses and supervisions. The author reports a sad case of a candidate who ended up having his second report rendered unviable, since his patient moved out of state at 21 months into the ongoing high-frequency analysis, out of the 24 required by his institute. The applicant requested from his institute the authorization to continue by Skype, which was denied. He sought support at higher levels, which was also denied. Despite of that, he continued with the patient with whom he had a strong enough bond, but this was not endorsed by the institute. Finally, he withdrew from the training, as he felt its rigidity. Such a story seems like fiction to us nowadays, in a time not so distant from that (considering that there was already Skype)16.

As I go on, I realize that this review will in no way do justice to everything that is found throughout these pages woven by many hands, many pains, many loves, many stories, much resilience, much renunciation, much dedication. The idea comes to mind that “to tell this book”, we would need many other books, such is the concentration of thoughts, feelings, and even "advice", frankly shared.

Finally, I come to the final back cover. There are brief endorsements of the book, among which one by a colleague, also in training at the time. I like my colleague's words: "Another voice is also audible. Readers of Dante will hear: hold back all hope, you who enter here. Much difficulty awaits you; as do human splendors. "17, 18

As it often is the case, the poet's words carry the potency of a truth otherwise difficult to describe (without belittling the noble and generous attempt of these 42 analysts, in their testimonies).

Finally, I presented to the board of examiners the second supervised clinical report that sealed my institutional formation, before which I heard from my institute director: "Welcome to genealogy”. He referred to the great tree whose initial seed was planted by Freud's own hands.

As I see it, we continue together growing new branches, twigs and leaves from this tree, while supporting and strengthening the trunk and its roots. I believe that Dr. Busch helped us, with his gesture, to publish this; to leave written on paper, what we have experienced in different generations of psychoanalysts from around the world. In an allusion to Mahler, the composer, tradition not being the deadly act of cultivating the ashes - from which nothing would sprout - but the preservation of the fire. The desire in motion, in many of us, to keep, together, this flame burning.

Freud, the initial planter of this tree, was quoted no less than 140 times throughout these 42 reports. Despite the difficulties, the resistance, the anti-democracies, the always somber times in and outside each one of us, it seems to me that there is something very alive in all this. There is a flame burning bright and incandescent. Fred Busch, in the voice of these colleagues who have kept this flame alive for many years, tells us this.